​Who is Mrs. Swaney?

​​​This is my 26th year at Pleasant and my 31st year of teaching.  I have taught: K-8 Title I Reading, Sixth Grade, Fourth Grade, Third Grade, K-5 Physical Education, K-5 Music, Second Grade, and Sixth Grade Language Arts. This is my third year in 7th grade English.

My pre-college education was completed by following my father's coaching career including Logan and Zanesville.  He took the assistant principal's position at Lima Shawnee when I was in high school so that is my Alma Mater.

After graduation I married my husband Bob, and we moved to South Dakota to farm.  Then seven years and two children, Chad and Tara, later we moved back to Ohio.

After teaching at Marion Christian School for four years, I stayed home to have two more children, Abby and Joel.

In 1994, I returned to teaching at Pleasant.  I finished my Master's Degree in 1999, and then I completed twenty extra Master hours. I received my National Board certification in Early and Middle Childhood Language Arts in November of 2010, followed by my Lead Professional License in 2011.  In 2014 I was a National Endowment for the Humanities participant at Gettysburg, and in 2017, I spent a week participating in Asian studies at The Ohio State University.

My husband of 44 years, Bob, is a semi-retired engineer who manages our properties. In 2017, he graduated (Summa Cum Laude) with a  degree in Biblical and theological studies from Liberty University.  Our son Chad lives in Seattle. In May of 2019, he received his Ph.D from Pepperdine University in Malibu.  He was recently chosen to be on the board to help provide housing for needy people in his city. Tara  finished her Master's Degree in education and teaches freshman English. She is married to Steve, and they have three children: Griffin 14, Maddy 12, and Mason 9.  Abby stepped down from her teaching job to pursue a career as a mom.  She  is married to Andrew, and they have three sons, Bennett 5,  Elliott 4, and Matthias almost 2.   Joel, a loan officer,  is married to Emily, and they have 2-year-old Easton and Aria will be 1 in September.

Most of my time is spent honing my teaching skills, reviving my French, studying Scripture working with anopiate recovery group, spoiling my children and grandchildren, traveling, biking, and enjoying an occasional ride on our Goldwing. This summer I also finally got my vintage Corvette.

2018
This  summer included trips to Seattle, Victoria, British Columbia, and
a family beach house stay at Isle of the Palms, South Carolina.
Pictures summer 2018
2017
This summer my husband and I went to New York City.
​ Here are a few pictures from that adventure.

This summer we took our three oldest grandchildren and their mom on a trip out west in an RV. Their dad joined us in Rapid City.  This is the Powerpoint my nine-year-old granddaughter Maddy made to show all the places we were planning to go.​  We had to go to all the Laura Ingall's places because she loves the Little House series.
Click Here for Powerpoint 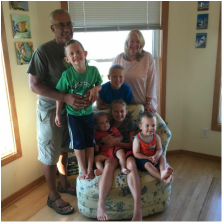 ​Finally this summer we rented a beach house and spent the week with our entire family on the four-wheel drive only beach of Outer Banks. Of course, on the way home we had to stop and see Jamestown, Yorktown, and Monticello. 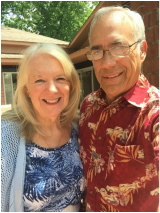 ​The summer of 2014, I was privileged to study at Gettysburg as a National Endowment for the Humanities scholar. If you would like to know more about this click on the button.
Gettysburg